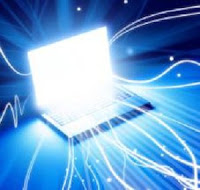 Thanks to all of you who spent the time tracking down your favorite stories,  we’ve created a long list of “Readers’ Choices” online at  Flash Fiction Chronicles.  There are STILL many many many terrific stories out there not on this list so we will have to do this again.
Please take the time to scroll through the list and read some pieces you might not have read before.  Let the author know if you loved it.  Share with others.
Posted by Gay Degani at 9:46 AM No comments:

Since the locusts and fire and quakes haven't gotten me yet and because there are a couple more dates on the apocalyptic calendar, I realize I should at the very least update here so that when the Eloi dig out the ruins of California (sometime after the great EQ when we've fallen into the Pacific and the drying up of the oceans, they will emerge from their hiding places), some archeological latter day Zahi Hawass will announce the discovery of The Lost World of  La-La Land.

At least if I do an occasional update, I'll know the record will be straight.

LAUNCH OF THE BEST OF EVERY DAY FICTION 3

So we went to Vancouver, Tim and I, so I could attend  EDF's official launch of its third "Best of" anthology.  We had one glorious day, weather-wise, and then a couple with the expected drizzle.  It was great to meet with some of the EDF staff and with authors K.C. Ball, J.C. Towler, and Peter Tupper. The signing was at Blackberry Books on Granville Island.  Thank you, Joseph. Pictures on Facebook.

Tim and I also visited the Museum of Anthropology and were overwhelmed by their fabulous collection not only of Canada's First Nations but of other cultures also.  The facility itself in beautifully designed and easy to get to out by the University of British Columbia and because we were exploring we found Jericho Beach and Park.  So amazing. Pictures are on Facebook. 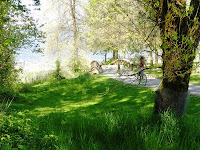 We also managed to fit in the Aquarium in Stanley Park where we saw our first belugas in person.  More picture-taking.  I love digital cameras!

I do have some writing updates for 2011.   I haven't been doing much writing these last five months, but some things have come out.

I've been interviewed too.

Also out any day is "Wounded Moon" in the Short Story America Anthology.

Mason took a slice of Spam out onto the cabin steps so he could bay at the moon.  His plaid pajamas were stiff around the armpits from sweat and where he’d spilled evaporated milk a couple of days before.  The flannel gave off a pungent smell, a strategic weapon against the incursion of pests, both the four- and two-legged kind.

These nightly summits between Mason and the moon were one-sided, the man in the night sky being taciturn by nature, but then nobody talked to Mason any more.  Nobody except for the kid.  And the kid was not one to chat.
Three months after he’d arrived at the cabin, with its pump over a primitive sink and an outhouse under the firs, Mason began to notice how night after night the moon constantly changed.  Slow.  Persistent.  New moon, waxing crescent, first quarter, waxing gibbous, full.  It was full now, a deep yellowish-red, all the crests and valleys visible.  What month was it?  September?  October?  A hunter’s moon.  A blood moon.
During the day Mason scribbled his lunar observations, doodling in the margins, his pen absently tracing craters and darkening seas within lopsided circles.  Writing had been Dr. Leggett’s idea, a journal of thoughts, daily affirmations, the subject matter irrelevant.  So Mason wrote, getting down everything he knew about the moon.  He liked where it led him.  The pages of text ate the hours.  The almost-poems shimmered in the slanted light through the small cabin window.  And his drawings, the curved cuticle of a crescent moon, the plump circle of the full.  Eventually he asked the kid to buy him a book, something along the lines of The Idiot’s Guide to the Moon.  All this interest in lunar activities seemed like a good sign to Mason, although he never let the word “recovery” take up permanent residence in his mind.
Posted by Gay Degani at 9:18 AM 1 comment:

EDF's May Calendar of Stories

EVERY DAY FICTION’S MAY CALENDAR
Posted by Gay Degani at 9:17 AM No comments: