Every Day Fiction's February’s Table of Contents:
The London Eye on February 27 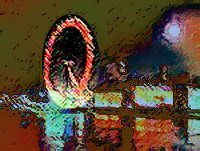 There I am on February 27 and several of my buds on the list and a big welcome to fellow Sister-in-Crime Los Angeles member Michael Mallory. Michael writes about books from the viewpoint of Amelia Watson, the good doctor's adventurous second wife. He's a funny guy and a terrific writer, so be sure to catch "The Novelist" on February 21.

Photos from VANLAND: Best of Every Day Fiction Signing 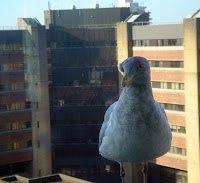 Got back from the Best of Every Day Fiction signing on Sunday. Tired and happy. Here are some pix to give you all a birdseye view of V-BC and the EDF gang. 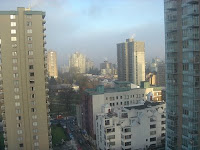 Cityscape from the 19th Floor 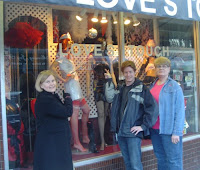 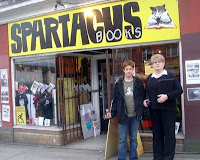 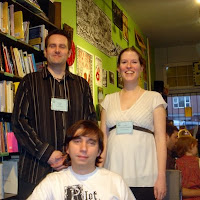 The BIG THREE and a half 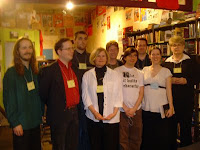 Like so many subscribers to the philosophy that "Today is the first day of the rest of my life," one of the items on my New Year's todo list is to clean up a drawer or cabinet or closet a day. Yesterday I pulled out my Clairol electric roller appliance. Can anyone help me figure out how old this thing is? 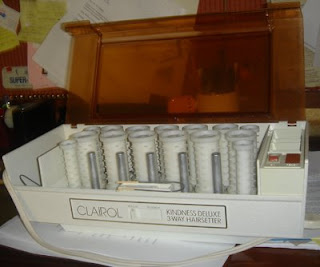 It's missing a whole row of curlers. Those silver rods which heat them stare back at me like dental roots. If you've ever had a cap or root canal, you know what I'm talking about. The gaping hair appliance looks as if someone with a hammy fist smashed out Clairol's teeth. Made me wonder where I might have left those rollers and when? And are they replaceable? Does Clairol still make this kind of thing?

Mostly seeing this piece of my personal history, makes me feel old. They became popular when I was in high school. Which means there was a time in my life when there was no such thing as electric rollers.

Of course, my mother did have a beautician give me a duck tail in the second grade. I felt humiliated, shorn of 95% of my hair, I felt like the proverbial ugly duckling and decided I would never have short hair again.

I started setting my mop in the fifth grade. My awareness of the other sex started around then and it became essential that I never appear at school with unkempt hair. Rollers in those days were round wire tubes with a brush inside and netting over them. I washed my hair every single night, set it in these French Revolution items of torture, capped my head with the plastic hood of a hair dryer and went to sleep too the drone of vanity. I did this every single night of my life until the invention of electric rollers.

I'm trying to remember all the different curlers in my life? The skinny plastic ones of my childhood to achieve the perfect (and still popular) Shirley Temple ringlets, the spongy foam ones that were comfortable to sleep in but gave my hair a flat lopsided look, and pin curls. Sometime in my life before rollers of any sort, there were bobby pins! How important it was that each little strand of hair was twisted in an exact circle. A sloppy job with pin curls led to taunts on the play ground. Ironically in high school, there was a time,long before it was ecologically correct, when I went in the opposite direction using coke cans instead of rollers.

But then, Clairol appeared on the scene with the perfect solution: electric rollers and I used them for years with only a brief four-year period in there when I ironed my hair to get it as straight as a nail.

I'm putting the rollers in a Salvation Army bag. I figure some collector out there will have extra rollers to fill in the gaps and will sell it on ebay for 20.00+40.00 for shipping.

Or maybe I'll just shove it back into the cupboard, close the door, and forget about it. That way I can pretend that my younger self is still a round...at least a little bit.
Posted by Gay Degani at 7:09 AM 5 comments:

Happy for Kate, What happened to Anne's face, and I've got to stop goofing off

This will be brief. No writing lectures. I have too much to do.

BUT I did want to say I'm happy for Kate Winslet. Although I haven't seen "The Reader" nor "Revolutionary Road," I'm happy one of my favorites is finally getting the recognition she deserves.

Just a quick remark on Anne Hathaway's face in today's LA Times. It looks like an illustration to me. Did someone over there photoshop her head? 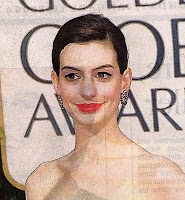 And last of not least. I am disappointed in Outliers. I'm sorry I recommended it. Gladwell's essay on success isn't the tight, cohesive analysis of what creates success that I expected. However that said I'm happy he has reasserted that persistence is as essential as talent and that sometimes with a little talent and the right amount of practice, a person can arrive where she wants.
Posted by Gay Degani at 7:00 AM 1 comment:

It is what a character does in difficult situations that reveal who the character is, and therefore reveals the character's humanity. The revelation of our humanity is what literature offers the reader. (Watch Tess of the D'Urbevilles on Masterpiece Classics if you want an excellent example of deep character revelation. Better: read the book by Thomas Hardy.)

It is the physical "journey" the character "goes on or through" during as she acts and reacts to the physical situations of the story. A story opens with events (the plot) and these events create the physical journey. And this is often enough in some genre stories.

But many genre writers and lit writers take their characters on an emotional/spiritual/self-revelation journey as well. The main character is established at the beginning as having a particular mindset or attitude, and who will realize the status quo no longer is possible and must reach inside to meet the challenges and either fail to do so (classic tragedy) or succeed (classic comedy) or many many points in between depending on what the writer decides to do. What changes the status quo can come from the inside of the character or from the outside, but it should set up a desire, want, need, mission, or state of mind which causes a conflict for the main character so that that character takes action until some kind of resolution is reached.

If the character has no obstacle standing in the way of her goal, need, want, challenge, then she will most likely stay on the couch with a bowl of jambalaya and watch Law and Order.

This look at basic structure is somewhat simplistic. There's a lot more to it, but it is helpful to know that what stories do is reveal character through conflict.

This gives the writer a tool to use when rewriting so that she creates characters who will get off the couch. Unless, of course, that's the story you are telling. Then the not-moving-off-the-couch is gonna be just perfect for creating tension between your character and her husband, her kids, her boss, her mother, her lover, the garbage man. How long can she hold out? What will she do to stay on the couch? How will she respond when they bring in the shrink, the priest, the fork-lift?

If we begin with love and a smile, maybe we can end with the same things?

This is exactly what I need to kick off my new year. I've never embedded anything so I hope this works. I ran across this over at Sean Lovelace's blog and he in turn discovered it at someone named Adam Robinson's.

Posted by Gay Degani at 7:43 AM No comments: