What Came Before Reviews

What Came Before by Gay Degani was written by a woman who, admittedly, got “lost in living.” Like so many people, and I suppose I mean particularly women, Degani felt writing took up too much of her time, time that “should” be spent—and would be better spent—raising a family, i.e. taking care of others and their needs.
“I was too busy living and too afraid to give up ‘real life’ for something I felt was basically selfish.”

A surprising truth: marriage, family, and a career or employment eat up the lion’s share of the day. How can that be? How can this new world, which we chose, consume so much time that one’s creative need must be cast aside?

My attempts to carve out a space for my fiction writing came in the form of an alarm ringing obnoxiously at 4:30 a.m. This would give me an hour and a half to devote to my creative love before waking my wee one and beginning our day. The snooze button would be pushed, but hopefully only once, then I was rising to splash cold water on my face, make coffee, set up my corner of the dining room table that faced East, and open the window to a lightening sky. Finally, I would sit down to write while the world still slept. It was luscious and productive. It also added to my exhaustion—I was divorced, working 6-day weeks as I started a photography/headshot business, and trying to remain solvent (no child support those first few years). Between drop off and pick up from daycare/pre-school/elementary school, grocery shopping, laundry, cleaning, cooking, and bathing, while also reading, soothing, comforting, playing, and being with my child—I found I was hitting my emotional, mental, and physical limit, hitting a brick wall, every single day. And though writing fiction helped keep me sane, this pure act of creating, which was a caring gesture to address my needs and wants, very often did not fit into my 24-hour day. Days of not writing slid quickly into weeks and months. Only after a time, when I began to feel restless, antsy, slightly anxious and untethered, did I try once more to write. I never managed to settle into a groove or establish a routine because the first thing that fell off my list if I was running out of hours in the day was my writing, even though writing usually settled my feet back onto firm ground. But this inconsistency—and the failure I felt from being inconsistent—is much of the reason why my novel took ten years to finish.

Aside complete.
Degani’s What Came Before took a dozen years to complete, she admits, and I’m glad that she persevered. Her story of mothers and daughters, emotional bonds and familial ties, as well as societal norms and historical prejudice—all set within a murder/mystery plot—is an absorbing, compelling read.
Degani has created a situation a reader will never suspect is coming, and I found that intriguing. Because of it, the author is able to delve into—for good and bad—1950s Hollywood, the entertainment industry, and society as a whole. Being a lover of history, I enjoyed this angle and learned several things of which I was ignorant.
The murder/mystery element seems almost secondary to the protagonist Abbie Palmer’s personal journey, until the last few chapters where the style of the genre finally makes its presence felt. So much of her story reads true to life that when weapons are drawn finally, it’s almost comedic and jarring—ah yes, woman in peril time. I wasn’t reading What Came Before as a classic murder/mystery novel and the culminating reveal caught me off guard.
From a critical view, I would have employed some editing, eliminating repetitive language, encouraging the disclosure of what lay at the core of a repeating motif, altering one off-note at the ending, and a re-working of some dialogue in an effort to be more thoroughly authentic. That being said, What Came Before is a solid, worthy first novel. I was thoroughly engaged in Abbie and her history of a famous, tragic mother and neglectful father; her current crisis of marriage and needing to find “a room of one’s own” to create her art; and her falling into a situation, realities, and worlds of which she’s completely unfamiliar. There’s a lot going on, but Degani has control of the reins.
In the author’s note at the end of the book, Degani qualifies her book as not serious literature, though she hopes readers find it entertaining and “somewhat thought-provoking.”
We did read What Came Before in a handful of hours, in a single sitting, and we can confirm that it has substantial entertainment value. Additionally, it has depth with layers to be contemplated. A story that explores a character’s need to create art yet find balance with ‘real life,’ with which many of us can identify, then includes abrupt confrontations that illustrate past societal shortcomings, which have lead to, in the present, formidable consequences, is a book on which we could ruminate and which we savored.


Within the first two paragraphs of Gay Degani’s novel, What Came Before, the reader is thrust into a story that sizzles:
I can’t run. Can’t breathe. Dry kernels blow through my lips. I wake up sweating, legs tangled in sheets, eyes gritty, mouth dry, my brain jammed together like frozen broccoli. I rattle my head and the nightmare dissipates, leaving me alone in my bed at the Tiki Palms. It was 94 degrees in our Hollywood bungalow when my mother opened the door to our O’Keefe and Merritt oven, turned on the gas, and stuck in her head. If she’d had a car, she could’ve driven down Sunset Boulevard through cooling hills and walked into the ocean. Maybe then she would’ve changed her mind. I was four.
What Came Before is a page-turner if ever there was one. Replete with rich, individualized characters, the book moves at jet speed. One bomb drops after another, embroiling the reader in a race to discover what will happen next.
With the action, however, we get many literary flourishes such as these:
What binds two people together? Lips? Fingertips? Ropes? Chains? Sometimes memory is the strongest tie. The old man remembers her in patches of clarity, like catching a shimmer of an aquamarine sky behind ragged clouds. Her eyes were that color. He lifts his hand, ready to place it gently on her hair, stroke her milky skin with his thumb, but she’s not there.
My first sensation is a long sweet pull through dark water. Then I extend again, another pull, and whoosh, I break the surface where I meet the snouts of alligators. Ash glitters on moss. It’s muggy hot.
My swamp’s been hit by a class 5 hurricane. I’m clinging to the Kon Tiki monolith in front of my building, my body pulled thin and ragged like a wind-whipped flag.
Professor Abbie Palmer, still reeling from her “Bikini Girl” mother’s suicide so many years ago, abandons her family to set up a separate, more creative existence in The Tiki Palms Apartments. Soon she’s plunged into a mystery full of intrigue and danger. There are fires and deaths and epiphanies throughout, enough to keep the reader hanging on every word.
What Came Before is a tight yet robust story, littered with questions, both literally and figuratively. The dialogue rings true, rippling with Gatling gun intensity. We are faced with dilemmas about the conflict at hand, as well as issues of racial strife and marginalized people. In short order, the cast in Degani’s book become our friends and foes, people we know as well as our best friends.
Reading the book is like binge-watching your favorite cable television show. It’s a joyous ride from start to finish, and once it’s over we are left greedily wanting more.
What Came Before at Every Day Novels.
***
Len Kuntz is an editor at the online literary magazine Metazen and the author of The Dark Sunshine from Connotation Press. His next story collection, I’m Not Supposed To Be Here And Neither Are You is forthcoming from Aqueous Books in January.

Comments Made in the Preditors-Editors Poll 2015

Comments for: What Came Before, Gay Degani, Every Day Novels 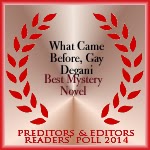 Gay Degani's 'What Came Before' gives the reader interesting characters in a well-written novel of much mystery. I highly recommend this book.
A very visual writer, a delight to read.
I have followed her writing and love all her work.
A quick read, 'What Came Before' left me hungry for more! Degani knows how to bring characters to life and care about what happens to them. I look forward to reading more from this author!
Loved the short snappy chapters and zippy pace of this novel.
Great debut novel. T
This a fast-paced entertaining story that combines elements of a good police procedural with a family mystery. It has great pacing. The main characters are well-drawn and believable. I cared about Abby and Mackenna and I kept turning the page to find out what happened. It’s a good story.
A fast-paced murder mystery and a great character-driven story.
This author kept me on the edge of my seat and surprised me at every turn! A great read!

April Bradley: This is the book I get to finish…my reward, that juicy carrot swinging…once I turn in this last thing this week. I opened it as soon as it arrived in the mail and started reading. Before I knew it, I was half through it. Gay Degani's What Came Before, review by Susan Tepper, author of The Merrill Diaries, my next treat!"