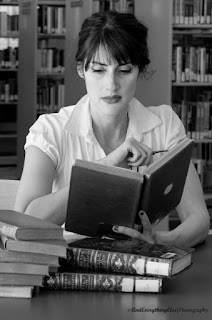 This spot was destined for Nancy Stohlman's Journey to Planet Write; however, fate intervened on an interstate near Denver on Friday 5/20 when she was hit head-on by another car.  She's home now but suffered a broken elbow along with the 6 broken ribs

It just doesn't feel right for me to fill this space with someone else's journey and hopefully at some point in the future, Nancy will write her own story, but in the meantime, I decided to ask a few of Nancy's friends to contribute stories, comments, photos, anything to honor Nancy.

Brought to you by Women Who Flash Their Lit


"One day, a couple of years ago, Nancy sent me an email which read, 'This is what I had left after editing 40 pages of a dystopian novel.' She attached the following: 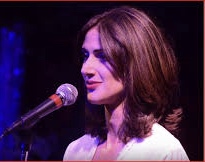 How much are you getting paid to do this? he asks, a crease in his forehead.Enough to pay off my student loans I said, as he begins to tattoo the Coca-Cola logo across my face.

Look how much she gets done in 37 words: scores at least three direct hits on the social condition, makes a funny and creates a memorable character. Wow!"


~the world does rotate


We are in New York reading for the kickass flash anthology, Fast Forward: A Collection of Flash Fiction, edited by Nancy Stohlman, Kona Morris, and K. Scott Forman. It is my first reading outside of New Mexico.

“You’re next,” Nancy says. She illuminates blasts of greater shores to push toward. Every bit of her is lit electric beauty and bemused camaraderie.

The rest is a blur of acting as though it’s no struggle at all; I’m used to this, I’m not about to barf. I see Nancy’s wild smile somewhere in the midst as she asks me to “eat the mic.” I put my mouth over it and get laughs. That rocks me through the rest of the reading.

I become a groupie. I send my work to all of their anthologies and go to all of their readings in Denver, Portland, New York, Denver, Denver, and Denver. The LOVE is HUGE with talent, humor, and a damn great time!

In Portland we started shooting rubber bands when a guy glued himself to the mic and read on and on and on while the bartender and waitresses were putting up chairs and closing the place down. He was deeply embedded in his words, unwilling or unable to notice he had lost his audience long ago. As one of my favorite poet’s, Bill Yarrow, put it in one of his poems about poets: ‘Just two more...”

I’ve been going to Denver for the last six years to read and hear some of the best voices out there. Nancy Stohlman is a phenomenon. Her work is extraordinary, like her being, and she rocks it from flash master to writing and starring in a published opera, to the wild-ass lounge singer of heavy metal songs in her band, “Kinky Minx.”

There is no one like her and never will be. Her work is fearless and without limits. Stohlman is yes, mythical beauty, an unparalleled writer, teacher, and promoter of her peers, but, never to be diminished is her beyond the beyond hilarity, her sidelong glance, her passing remark that has me running to the bathroom after spitting out my beer. 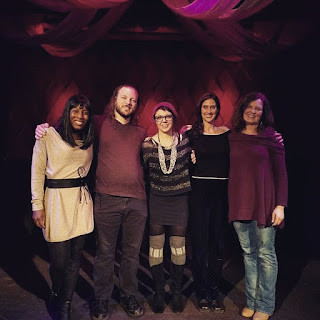 
"Nancy and I read at Syntax Physic Opera as part of Monique Lewis's At the Inkwell reading series in February!  It was a great night and Nancy of course knocked it out of the park reading her amazing stories.

I love works of flash that use extraordinarily small canvasses, and there is so much to admire about this story. This work of micro fiction brings my fingers over the shark's skin, over and over, and I am fascinated.  I feel the power and weight of goals, the uncertainty of dead air. Will the shark snap? Or will the father keep all of his fingers? For now, we wait.

Here is Nancy's story, nominated for a Pushcart Prize by Blink-Ink.

The trick, he says, is to just lightly move the fingers. The shark has the frozen, unimpressed expression of all sharks. Are you coming home for dinner? I can’t stop now, he said. It’s only been 9 hours. It’s about goals, he added. Your mother never taught you the importance of having a real goals.

Nancy is the personification of fairy dust. She creates magic in every word she writes and then, if you aren’t already sufficiently mesmerized, damned if she won’t tantalize you with tunes in a voice so seductive that the Sirens of the sea bow to her awesomeness.

After meeting on a Facebook writer’s page, taking her flash fiction class, and swooning over her collection, “The Vixen Scream & Other Bible Stories,” I got to meet and hang out with Nancy at AWP a few weeks ago.  She was as lovely a human being as she is a talented writer, and I’m honored to call her my friend.

It is said that there are no accidents in the Universe, and I believe that.  On her death bed, Nora Ephron’s mother told her to take notes because everything is copy.  I say it’s all fodder for flash and I can’t wait to see what Nancy’s brilliance makes of this experience.

According to medical experts, Nancy, you shouldn’t be here, but you are because the world needs your gifts, and the people who love you need that beacon of light that is your incredible spirit.  Sending you bushels of love and healing energy, my friend. 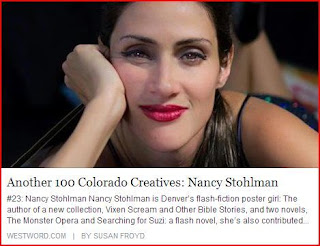 I love Nancy. She's a friend, teacher,editor, cheerleader and a wonderful writer. Zany comes to mind in some of her stories. I read last year in Denver at her invitation and got to meet some of the names I know by their writing. It was a blast. Hurry and get better, Nancy, we're all waiting.

this was fantastic. it made me smile. everyone is rooting for you, Nancy. you are so loved.

Nancy, you are so amazing. I love you sweetheart.
xoxxo

Terrific post and so grateful I'm part of this family! Nancy we all wish you the same: sexy, speedy, loving recovery! So thrilled you are as revered as you are! xoxo

Yo Nancy ~ amazing comrade, fabulous friend, beautiful being, exceptionally inspiring writer ~ we are all rooting for you and oh so grateful that you are making it through this ~ rock on !

Great collection of high-spirited people to honor Nancy! Here's to your fast recovery, Nancy!! And great way to hold her place, Gay!

Thanks all of you for your support: for Nancy, for the community and of course for me and my efforts. We are so lucky to be a part of this....this....endeavor. Love love all of you.

I learned about the accident yesterday. I'm sorry but grateful you're alive. You radiate light and are one of the writers/teachers I look up to. I valued each class session taught and feedback that was given. I'll be praying for your recovery.-Tisha