JOURNEY TO PLANET WRITE: Late in the Game


Today we have a special treat. Here is the YouTube video Nina Rota created for Words in Place's "Journey to Planet Write!"

Excerpt from THE SHADOW TEMPLE
by
Nina Rota

something outside intrudes. rolling sound and flashing light arrive together soaking a pair of thin curtains. streetlight and electric hum. a second layer of thick curtain reduces the constant sound of tires cornering to a crackly hush, like walking on gravel in the countryside. streaking headlights, now muted, crawl slowly across the room.
inside, one cone of light from a swivel wall sconce. i barely see his dark eyes. sitting on the bed, i take his slender hips and pull him to me, between my open legs. i bury my head in his middle and wrap myself tightly around him, taking full possession. he surrenders.
my hand trails across his buttock and down the back of his thigh. my shoulders lift and my middle expands. reaching for a breath that was easy moments ago.
i undo his low hanging pants and rub my face across his belly, his soft skin. i move down and reach for him, then take him into my mouth. building fire with each stroke, i am completely sated till the next level of desire. he stays hard, pliable.
i stand up and move behind him, i reach around him. my hand still holds him. i push my face into his long hair and lean in. push into him. my entire body lights up. my arms are weightless, lifted. every cell rises, lighter than itself, and separates, till i am totally transparent. thoughtless. unaware except for his body. ecstatic.
slowly, my heartbeat grows louder. feelings rush back in, pleasure, longing. i untangle myself and move him to the bed, on his stomach. take off my pants and crawl over his back. slide a pillow under his belly, and enter him. my cheek in the curve of his neck, i spread my legs and go deeper. sink into him. i slide my arms under his shoulders, glue myself to his body, and thrust.
my core muscles pull in and up, arching my back, pulling my head down. my forehead digs into his spine as breath sharpens and turns in on itself. shoulders roll forward and constrict my chest further. thighs grab, every nerve online, till i reach the edge and, finally, lift off. flying on uncontrollable pulses passing through me nonstop. release and escape.

Note on Personals Wall in The Shadow Temple
fag identified dyke looking for someone to play out a scene between an older man and a much younger man,
please find me if interested, Nina 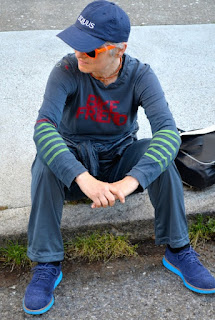 Nina Rota is a writer and filmmaker. Her writing can be found in Witness Magazine, Red Fez, and Diverse Voices Quarterly, among others. Her short films have appeared in Getty Museum’s Pacific Standard Time project and Anthology Film Archives. She is currently working on a book of essays titled Walls Crumble Before Me. You can find her at Facebook.com/ninarota and ninarota.com.

Here is the link to the YouTube video Nina Rota created for Words in Place's "Journey to Planet Write!"

https://youtu.be/UAOd_iqlmas
Posted by Gay Degani at 12:30 AM