JOURNEY TO PLANET WRITE: From Zero to 60 and Then Sum

Growing up, I wanted to be the next Nellie Bly, a nineteenth-century investigative reporter who would risk it all for a story. In grade school, convinced I was going to be a journalist, I launched my own newspaper and wrote a lot of short stories. Most of which my teachers gave mixed reviews. I was hardly a child prodigy. In fact, my successes back then were largely zero. Spelling and grammar evaded me. But ideas? Well, even then I was a lean in type of gal.

My professional journey as a writer began inside a radio and television station in Arizona, in the sixties. At the time, I was one of the few female voices on-the-air, and most of what I did–in addition to making coffee–was soft news. Things like; an interview with a woman who had found her mother’s engagement ring. Tips for cooking the holiday turkey. And on a particularly busy news day, updates on roadblocks and traffic signals. Back then, women’s voices were considered too light for serious news. After all, who would believe hard news, coming from the mouths of the fairer sex? To quote a popular expression: We’ve come a long way, baby! 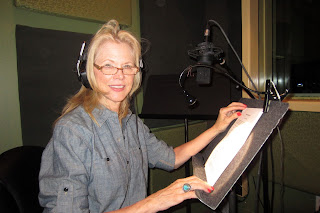 I started my career writing ten, thirty and sixty-second news and commercial copy, and if I was lucky, I got to voice it as well. What I learned was to stick to the facts and to write tight, smart and visual. If I was writing for television, to accompany film, less was more. While if I were writing for radio, I needed to use words that would make the listener believe he or she saw the story as it unfolded. In a sense, I suppose my career as a writer began by writing short–very short–works of flash-fiction. Albeit at the time, I was writing news and not fiction.

The hardest part of my growth as an aspiring novelist was giving myself permission to blur the lines between fact and fiction. Which didn’t come easily. Nor did going from seventy-five words or the equivalent of a thirty-second spot to a three-hundred plus page novel. That took time. About twenty-five years worth. Up until then, the closest I got to doing anything fictional was entertaining my cohorts in the newsroom on a slow news day. Like a stand-up comedian, I enjoyed blending the elements of several top news stories to make for a more ratings-driven read. Ha! Ha! The joke was on me when I realized my news director was standing behind me like the Grim Reaper. “Do that again, Nancy, and you’re out of here.”

Okay, I could be stifled. And for the sake of being a single parent with two kids to support, I adapted. But I’d be damned if I’d be quelled. So I socked away a lot of those story ideas for a later date.

In 2001, I retired from radio. Not with a gold watch, as was befitting in my father’s day, but with a brass ring. Enough money under my belt to start fresh and to pursue what had been my life-long dream. An equestrian newspaper and a horse to go with it. Talk about out to pasture! I was in my hay day, excuse the pun, and founded The Equestrian News, a SoCal equestrian pub that allowed me to ride and write twenty-four seven. I loved it, and I probably would have contented myself with the life of a newspaper publisher, if it weren’t for the fact that I had an accident. 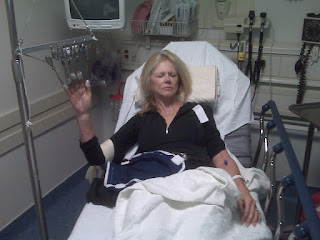 In 2011, I got bucked out my life. That’s right, BUCKED! My beautiful, bomb-proof horse showed me otherwise and dumped me on a trail with much more than a bruised ego. It wasn’t until I was home from the hospital, after two surgeries and lots of physical therapy that realized it was time to hang up my stirrups.

Once again, it was time to reinvent myself. Find a new career and settle on a new venture.

I’ve always believed the story picks the writer. And if ever there was a story that picked me, it has been those that I write about in the Carol Childs Mysteries.

Writers know about what they write or learn it on the fly as they research and invent those instances to which they are drawn. For me it was easy. I had spent the better part of my adult life in and around newsrooms. And since I’d been bucked out of semi-retirement, I figured returning to a newsroom, at least in my imagination, was safer than risking it all on the back of a horse and a delightful way to return to an industry I loved. 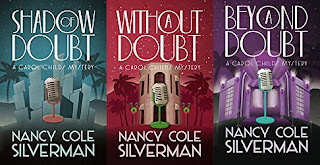 The Carol Childs Mysteries have been fun to write. Not easy, but fun. Like I said, the hardest part for me was letting go of my journalism roots and trying to forsake the image of a crazed news director standing over my shoulder wielding the Grim Reaper’s sickle. I think the discipline of working nine to five with constant deadlines was a big help. As for the rest of it, when I face the blank page, I think of it like I did when I was writing for radio, as theater of the mind. I’m not only the director, but I'm also the foley artist for sound effects and the actor for dialog. As for the story ideas, I’ve got a headful from my days in a newsroom and blended and punched up for effect's sake. 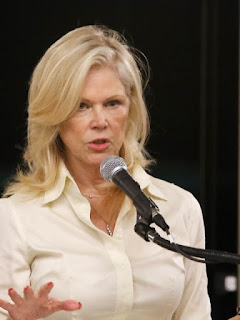 Nancy Cole Silverman says she has to credit her twenty-five years in radio for helping her to develop an ear for storytelling. In 2001 Silverman retired from news and copywriting to write fiction fulltime. Much of what she writes Silverman says is pulled from behind the headlines of actual events that were reported on from some Los Angeles busiest radio newsrooms where she spent the bulk of her career. In the last ten years Silverman has written numerous short stories and novelettes some on which have won awards and/or been picked up for publication. In 2014, Silverman signed with Henery Press for her new mystery series, The Carol Childs’ Mysteries. (Shadow of Doubt, December 2014, Beyond a Doubt, July 2015, and Without A Doubt, May 2016.