Interview with Sam Snoek-Brown about his Historical Novel: “Hagridden”

Coming this fall from Columbus Press, Sam Snoek Brown’s historical novel, Hagridden, explores the impact of the American Civil War on the bayou country of South Louisiana.  This taut drama, written in the style of contemporary literary fiction, is about two women and their struggle for survival.  In a world of chaos, they are threatened by nature’s harshest elements as well as man’s darkest impulses, and frightened by rumors of a ferocious “wolf-like creature” called a rougarou.

Gay-You have a “mash-up” of the mystical, the historical, and the literary in your novel – something Louisianan James Lee Burke does so well in most of his books. Can we start off by you talking a little about the genesis of your historical novel, Hagridden?

Sam-It actually has three geneses: I was always a bit of a Civil War nerd, just for the history of it. When I was in grade school, I read Civil War history voraciously, and when I was 11, my grandparents took me on a summer tour of battlefields and monuments throughout the South, but the idea to write this novel came about when I was in grad school at the University of North Texas. Because I’d written my master’s thesis on southern fiction, I got tapped to introduce Tim Gautreax as a visiting writer on campus.  He's s a Southern fiction author from Louisiana, whose most recent novel at the time, The Clearing, was steeped in the swamp. I had only read his short fiction at the time, but I had his novel on my mind while watching those samurai films, so that connection is what triggered my own memories of the bayou.

The morning of his reading, I was working on my introduction while watching old samurai movies, and I realized that for all the Japanese movies converted to Westerns, there weren’t any samurai films turned into what Tom Franklin calls “a Southern.” Since so many samurai films are set in the recurring Japanese civil wars, I knew I needed to write a US Civil War story that played with those themes of isolation and bitterness and survival. And demons, which is where I got the idea to include the rougarou.

Gay-”Rougarou?”  Please explain what or who that is. 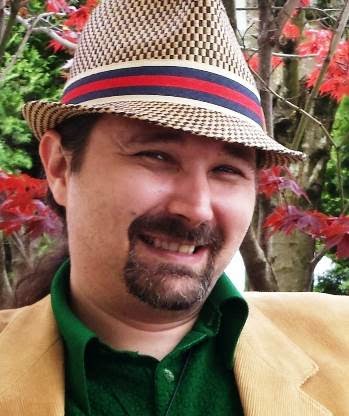 Sam-A rougarou is a bayou werewolf, a part of Cajun folklore. (The name is a Cajun slurring of the French for werewolf, “loup garou.”) For generations, it was a fearsome creature, but these days it’s mostly a children’s bedtime story, a scare tactic akin to the boogeyman to get unruly children to behave. In my novel, it’s a legitimate superstition as well as a useful ploy that some characters use to manipulate other characters. But there is a real rougarou in the story!

For the book, I took colorful, historical Civil War troops like the zouaves and the courageous Louisiana Tigers and went several steps further, inventing a fictional regiment of rogue Confederates who call themselves the “Rougarou Corps” and would wear the skins of dogs into battle to terrify their enemies. There is at least one of these fearsome, possibly insane men in the novel.

Gay-How did you research this aspect of your story?

Sam-I read a handful of cryptozoology books as a kid -- silly children’s stories about the Moth Man and the Lake Champlain monster -- so when I was drafting Hagridden and thinking about some supernatural creature I could work into the novel, I had some dim memory of a swamp werewolf, and that’s where the idea came from. It took some looking to confirm the name and the basic folklore. For a long time I could only find thin, passing references on websites or the occasional vague blog post about kids growing up with the stories, but when I went to the Louisiana bayou last year on a research trip, I was able to access some folklore collections in local libraries and I discovered a wealth of detail, including where the rougarous come from and how to defeat them. Of course, there are a lot of conflicting stories, which I work into my novel as characters manipulate each other, but the old stories are amazing.

Gay-Researching the folklore, you actually took a trip “down the bayou.” I’m curious where you were since I’m from Houma, about 50 miles southeast of New Orleans.  What were your impressions? And also, how did being in the setting for your novel inspire you?

Sam-It felt nostalgic, in a way. The novel is mostly set in what is today Cameron Parish, near what used to be Leesburg (and today is the town of Cameron), and I set it there because I have family down there. My mother was born in Deridder and her parents are buried up in Rosepine. I have many fond memories of visiting my aunt and uncle down in Johnson Bayou, exploring the marsh, and riding my uncle’s horses on the prairie. It was never quite home for me – I grew up in Texas – but going back for the research trip felt like a kind of homecoming.

It was interesting to see it anew, though, through adult eyes and with a mind toward the novel. I didn’t realize when I wrote the first draft, but I’d accidentally set the novel near what is today the Sabine National Wildlife Refuge, so I spent a lot of time there, listening to the reeds and watching the gators. I also spoke to a botanical expert at the Cameron Prairie Wildlife Refuge about plants as well as local history.

There isn’t much living history left after all the hurricanes. Folks I spoke to in stores and on the streets in Cameron told me as much, and you could see it in the still-rubbled building foundations and the rusting cars washed into the marsh. I spent a whole afternoon exploring the ruins of a Cameron church destroyed in a hurricane a few years back. That’s also why I spent a lot of time exploring cemeteries – a favorite pastime anyway!

To experience Cajun folklore and culture, I mostly drove a bit east, into Lafayette, where I toured a few Acadian historical villages and museums and spoke to local experts. I actually thought of heading out as far as Houma, because I read some interesting stories about it in my historical research, but even Lafayette was a bit outside the geography of the novel, so I stuck to the southwest. Maybe I should head there to research another novel!

Gay-Louisiana is such a rich setting. Portions of my prequel to What Came Before will be set there. Tell us how you researched the Civil War.  I’m sure the material available to you was huge.  How did you pick and choose what to read and what to take notes on?

Sam-The book is set during the Civil War, but it’s really about war’s impact on those left behind, those who are supposed to be outside the war, but are impacted by it anyway. Most of my initial research was about the region and the time period and the characters. I read a lot about how Acadians traditionally built their homes, about what sorts of clothes ordinary people wore, about the weather patterns and hurricane records from back then. At the time, I was living overseas and had to do all my research online, so I relied on NOAA statistics, photodocumentaries of Acadian reconstruction projects at Louisiana universities, costumier websites and so forth. It was all touch-and-go research, just enough to fill in some details as I was furiously hammering out the first draft.

However, as the research got more intense and more important to the story, I finally emailed the librarians at the Cameron Parish Public Library, who turned me on to the research of southeast Texas historian WT Block, much of whose work is available online. That was a gold mine, and his work led me to digitally archived newspaper accounts and, most importantly, editorials. That got me looking for a digital archive of Harper’s Weekly, which was probably the most important national record of the Civil War as it happened, and I finally found that archive on the Sons of the South website. In Harper’s Weekly, I found the kinds of everyday details that would be crucial to my characters’ lives – mail-order pistols, advertisements for dresses and shoes, best-seller lists of popular books, and so on.

When I got back to the States and started revising the novel and fleshing out the characters’ lives, I hit the libraries and read a lot of personal diaries from the war era – of soldiers in the field, of women back at home, of politicians, and also of farmers, slaves, and merchants. Of course I read up on rougarou folklore and because a couple of the characters had been in the war, I finally got around to reading up on the few battles that did take place in Louisiana and along the Texas border.

Still, on my research trip to Louisiana, I read up mostly on the climate and the culture and the folklore. Throughout the research process, the only things I was interested in were things that would feed into the story. Story always came first, and the research was only ever in service of that. I made sure to take what I was reading to the page as soon as possible. If I found something interesting or something useful, I’d grab it and put it in the story and get back to the writing, because the writing was the important thing.

Want to know more about Sam?

Samuel Snoek-Brown has a doctorate in creative writing from the University of North Texas and his work has appeared in dozens of print and online literary magazines. When he’s not teaching college English or writing fiction, he works for Jersey Devil Press and judges fiction contests.

Samuel has been shortlisted in the Faulkner-Wisdom competition, twice for short fiction and once for novella; he has also been nominated for a Pushcart Prize and is a finalist in the 2013 storySouth Million Writers Award. He received a 2013 Oregon Literary Fellowship for his novel Hagridden. Learn more about Samuel Snoek-Brown on his website, SnoekBrown.com.