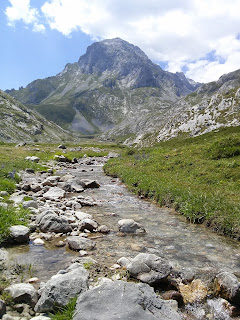 Last summer, my husband Paul and I took a trip to Spain. I’d never had a passport before or been across the Atlantic. Paul and I had never thought of Spain as a place we might visit, until we happened to watch a movie about the Camino de Santiago, the great religious pilgrimage route to Santiago de Compostela in Galicia. We looked at the footage of woodland trails, blooming countryside, and turquoise ocean, and then we looked at each other. “Wanna go?” “Yes.”

I’m a nervous traveler. Imaginary dire scenarios line up in my head (car wrecks, broken bones, food poisoning, you name it). When Paul and I arrived in A Coruña, Galicia – a new continent! A different language! Medieval churches and Roman ruins! – I wanted to be thrilled. Instead, I could only think about how I didn’t belong there. I didn’t speak enough Spanish. I couldn’t read street signs or billboards or even a menu. Home was a million miles away, and if anything went wrong I’d have no idea what to do, and the strange ground under my feet felt no more solid than quicksand.

Then, early in the trip, I found a story. Paul and I visited a small medieval church in Asturias, a chapel consecrated to St. Toribio and housing what’s believed to be a piece of the True Cross. The story was that in the eighth century, a monk named Toribio traveled to Jerusalem and brought back a piece of the Cross to serve as holy relic in a new cathedral in the city of Astorga. The cathedral was built, but when the Moors invaded Spain some two centuries later, burning churches and relics, the monks of the Astorga cathedral fled for the mountains, taking the Cross relic with them. They also took Toribio’s bones; by then he had been canonized as a saint because of his journey to Jerusalem. The monks built a new chapel, the one Paul and I visited, and re-interred the saint’s bones there. In a bizarre twist, some five hundred years after the new chapel was built, one of Toribio’s bones was stolen to serve as the holy relic in another new cathedral.

Toribio’s story fascinated me. I thought about relics and stories-within-stories and how an ordinary man, like Toribio must have been, became revered as so holy that someone thought it was worth breaking into a tomb to steal a piece of him. As Paul and I explored Asturias, I started putting pieces together for a story of my own, which would become my second novel.

My first novel, a piece of literary fiction, took eight years of struggling and writing and re-writing before I finally decided it was as done as I could make it. I decided to set my next project in a fictional world, which shifted it into fantasy. I’d never thought of myself as a fantasy writer and didn’t know if I could do it.

Working on that second book turned out to be one of the most joyful experiences I’ve ever had as a writer. There were struggles and doubts, but the story pieced itself together and I fell in love with the characters and especially their world. Toribio was fictionalized as Ribas, a good man but very human priest who has profound doubts about the religion he serves. In that fictional religion, we learn how a young woman performed an act that, generations after her death, left her revered as a goddess. Stories inside stories. I drew on the real geography of Spain, the coast and the mountains and the flat, hot plains, for my fictional world, and tried to catch as much of it on paper as I could.

All of this brings me to the question of why I write. My first novel was a battle; it’s still unpublished, and as much as I’ve wanted to see it out in the world, I don’t know when or if that might happen. I don’t know about this second book either. My “quiet” style doesn’t help with pitching or selling books. Even in fantasy, which ought to have lots of plot twists and epic conflict, I find myself focusing much more on people: how they feel, what they say, how they treat each other.

Maybe that’s too quiet – that doubt nags me a lot – but it seems to be the way I write. And when I sat down to work on my second book, and these days as I’m working on its sequel, I go back to the Asturian mountains. Clear air, greenery, steep and twisty trails that only a mountain goat could navigate at speed, but so much beauty. As I write, I tap into the joy of discovering a new story, and remember the moment when the deep belief that built Toribio’s church sank in for me. That belief was rich and ancient, passed from one person to another for generations.

Stories within stories. Our stories make us human, make us whole, let us reach across time. Those things are all true, but maybe more importantly, our stories let us capture and re-capture the experiences that mattered most to us. Other people will see them differently, no matter how carefully we describe them: but when we record them, in some way we make them permanent. Because of that, and the joy of doing it, I write. 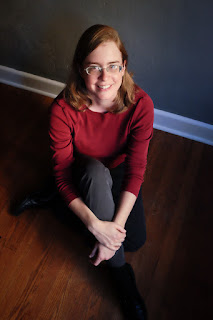 Kris Faatz’s short fiction has appeared in the Potomac Review, Kenyon Review’s KROnline, Glassworks, Reed, Bluestem and Helen, among other journals. Her first novel, To Love a Stranger, is a finalist for Schaffner Press’s 2016 Music in Literature Award. She has been a contributor at the Kenyon Review Writers and Novel Workshops and the Sewanee Writers’ Conference, and currently serves as an assistant editor with Bartleby Snopes literary journal. In her outside-writing life she is a pianist and teacher. Find her at http://krisfaatz.com, and read her most recent published story here: A Funnel of Time.