Interview: Sarah Hilary and her part in Pangea: An Anthology of Stories from Around the Globe

Sarah Hilary is one of the first people I met on line when I first started publishing. She and I both had stories at Every Day Fiction and the forum there was my first opportunity to become a member of an internet writing community. That was four years ago. This month, WriteWords, another writing community based in the UK, launches its first anthology, Pangea: An Anthology of Stories from Around the Globe, so I thought it would be interesting to talk to Sarah about how the anthology was put together.

Gay: Sarah, I’m so excited when I see writing projects that include authors from all around the world. The Pangea Anthology does just that. It illustrates how the internet can create communities and bring writers together. Can you tell me how this came about? But first, how did the authors meet?

Sarah: Thanks, Gay, yes it’s an exciting project to be part of. You know how it is with the internet—very few of us have actually ‘met’ but, at one time or another, the authors who are featured in this anthology were all members of the WriteWords online forum, helping one another improve our writing and generally being supportive and encouraging. I love when that happens. Writing can be a damn lonely business—and sometimes, at some points, it has to be—but meeting a group of people you trust and who’ll cheer you through the rough patches, is invaluable. One of the best times in my writing life was when you and I were writing buddies; we got so much done! 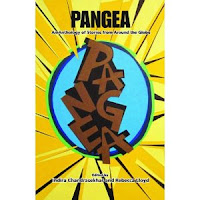 Gay: What exactly is WriteWords? How did you discover it and how did this group decide to tackle this project?

Sarah: WriteWords is an online community. You pay an annual membership fee and can choose between various groups, e.g. flash fiction, novels, short stories, where you hang out, post pieces of your writing, give feedback, get feedback, and so on. I found it by accident, and spent a couple of happy years learning to write flash fiction in groups with stars like Bill West and Tania Hershman. Good times! As far as Pangea goes, it didn’t become a project until two writers, Indira Chandrasekhar and Rebecca Lloyd, decided to try and put together an anthology of the “best of WriteWords.” They read stacks of stories posted in the groups and contacted the authors they were interested in. Indi and Becca have written about the experience. I was chuffed to be one of the authors they approached.

Gay: So it sounds to me that belonging to an online community has been something that has helped you grow as a writer. Let’s talk a little about the community that has created this anthology. You say they read tons of stories and then contacted the authors they were interested in. Does this mean you wrote a story specifically for the anthology or subbed something you already had?? How did this collection come about with these specific stories?

Sarah: My two stories chosen by the editors weren’t written especially for Pangea. In fact, as far as I know, none of the stories were. They were posted online in the short story forum on WriteWords. The two editors read through every story posted there, and made their selections. What’s really interesting is how the stories—chosen this way—fitted into three central themes. Identity. Order versus chaos. Loss. I guess these are themes which repeat in fiction, being such important ones. I find I write a lot of stories about identity, for instance.

Gay: Identity, yes. That theme is seductive to most readers since so many of us are continuing to learn about ourselves and our place in the world. I’d like to take the concept of identity and have you talk about it a little in the context of your identity as a writer and how being part of writing communities has influenced you. Do you belong or have you belonged to other groups—organized or loosely connected—and how have they helped you to develop your own writing talents?

Sarah: You ask the best questions! I’m loving this interview. The other evening I went to a one-woman comedy show by someone I work with. At work, she’s a very sweet woman, never draws attention to herself in any way. On stage she was a huge presence - and very very funny. She was pretending to be someone else, although still using her real name and talking about her family history. It was her personality that was different. This made me think about the disguises we wear when we’re “on stage” or otherwise. I’ve mostly belonged to online writing groups, where there’s the luxury of wearing a disguise.

I say “luxury,” but for some people it can be the opposite, I know. It’s very sad when we make friends online only to find out that the people we trusted weren’t real, not in the sense that matters. I consider myself extraordinarily lucky to have found so many genuine friends through online groups, not least yourself, Gay, with whom I buddied up for that terrific period when we were both writing so much, and learning so much. I think all readers desire an audience—we write to connect to others, to readers—and when that connection is broken it hurts, horribly. But I also believe that, as writers, we have to retain that trusting belief, that ability to put our words out there to be tested.

I also think, and this is the other side of the coin, that we have to develop an ear for our writing. No one else can really help with that. It’s a shame, but it’s true. We have to arrive at a place where we know instinctively when feedback from other writers—or readers—is valuable, and when it’s not. Not all advice is good advice. Indeed, some of it can be downright bad. So we should share, and we should listen, but it’s our own voice that we should be listening out for. I read somewhere recently that “A good editor opens up spaces in a writer’s head that were previously closed,” I think the same is true of good writing groups. If you get the sense that your mind is being closed instead of opened, then it’s probably time to move on, to find somewhere where the opposite is true.

Gay: Last question. So what do you take from being a participant in this anthology is drawn from around the word? How has being part of this project enhanced your writing in the future?

Sarah: It’s interesting, insofar as the stories I have in Pangea were both written a long while back. I’ve learnt a lot about writing since then, but what I’ll take away from the experience with Pangea is the wealth of stories being written around the world—and how the themes came together, without any framework in place to make that happen. How big the world is, and how small. And I learnt a heck of a lot about publicizing a book. It’s been a hard slog, but worth it to see the thing coming together now. We have this blog tour—thanks to the generosity of writers like yourself—and it’s truly international. Not just writers, either. We’re appearing in Nokia Connects, a blog read mostly by photographers, but it goes to show that the creative world will open its arms to projects like this, that bring us closer to understanding the world and our places in it.