Sue William Silverman and Pat Boone: Memoirist Explains It All

One look at Sue William Silverman’s website assures you that this is a woman who does not flinch, not from the past, not from the present, and certainly not from the future.  With three memoirs and one book on the craft of writing memoir, Sue, a professional speaker as well as a writing teacher, has a lot to say and has kindly agreed to chat with me.

Gay Degani: Your memoir, The Pat Boone Fan Club: My Life as a White Anglo-Saxon Jew, vividly evokes the wholesome touchstones of the 50s and 60s of the last century, including Pat Boone, “American Bandstand,” the movie, State Fair, even though your personal reality was quite different. A famous picture of the Boone family on a bicycle, mentioned in your book, seems to embody the innocence of that time.  Can you talk a little about what the picture meant to you and why?

Sue William Silverman: The photo was in Life Magazine and, yes, it is of Pat Boone on a tandem bicycle with his wife and four daughters. I loved that photo and stared at it seemingly for hours. It represented several things. For one, here was a family, all together and smiling, perfectly balanced on a tandem bicycle: it captured the essence of this family that must, likewise, be perfect balanced.

So to me growing up in an incestuous family – one completely out of alignment, unbalanced – I wanted, more than anything, to be Pat Boone’s fifth daughter on the bicycle. And if I were on the bicycle, then I could ride far away from my own family and belong to Pat Boone’s family.
At the same time, it was a still photograph. Here was Pat Boone and his daughters captured in a moment of time. As long as I kept watching the photograph, Pat Boone would never leave me. It was as if I believed if I continued to stare at the photo, I was, in essence, with him.

You know, as a kid, there is a lot of magical thinking going on, so this was my fantasy/belief: If only Pat Boone would adopt me, if only I could have a seat on that tandem bicycle, I’d be safe. Or, by the same token, I would be safe as long as I focused on that photograph! 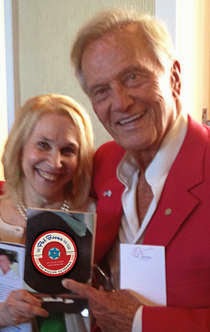 And they looked like that all-American, white Anglo-Saxon family. I believed they could save me from my scary family that happened to be Jewish.

GD: This is so personal, what made you decide to write memoirs rather than fiction?

SWS: Actually, I tried writing my story as fiction. I began as a fiction writer and have written something like five or six novels (bad novels, thankfully unpublished) before I switched to memoir. Frankly, back when I began to write seriously, in the mid-1980s, no one was even talking about memoir. No writing programs taught it: you majored in either fiction or poetry.

So, as I say, I tried telling my story in novel after novel. In other words, on some level, all of these novels were more or less about incest – but I disguised my true story as much as possible. Yet it just didn’t work. The voice in the novels – all of them – sounded emotionally inauthentic.

Then, about ten years or so later, when I was finally in therapy, my therapist suggested I try writing my story as nonfiction. At first, I just blew off his suggestion. I was convinced I had nothing to say about myself. Besides, who would want to read a book about me? That was what I believed.

But then my parents died. My therapist said, “Maybe now you’ll feel safe enough to write about yourself.” Initially, just to humor my therapist, I agreed, thinking I’d maybe write one or two pages and that would be that. What happened, though, is that, within a three-month period, about 300 manuscript pages just fell out of me. That was pretty much my first memoir, Because I Remember Terror, Father, I Remember You. From there, I’ve written two more memoirs and one craft book on how to write memoir.

GD: It sounds to me as if all those novels were rough drafts of your memoir, preparing you for something that you could do and you could do so well.  Do you have a writing process that's evolved from switching from fiction to non-fiction?  How is writing one different from writing the other?

SWS: Yes, exactly! On many levels those novels were rough drafts, preparing me for the time when I would have the courage and insight to write my first memoir. And spending ten or so years writing novels was certainly not a waste of time! I was, after all, learning how to sustain a narrative, form an arc or plot, write dialogue, set scenes, develop character. Obviously, in a memoir, the protagonist is myself, not a fictional character, but a memoirist still needs to develop herself on the page, make herself believable.

From my perspective, the biggest difference between memoir and novel (besides the fact that one is fiction and the other is nonfiction) is the need for reflection. Writing a memoir is, at its heart, a journey into the heart and soul of the narrator. A lot of introspection is needed. A protagonist in a novel, especially one that’s written in the first-person POV, can be introspective, but it isn’t necessary. A memoir, on the other hand, needs to be more than a “surface” plot of “first this happened, and then this next thing happened.” A memoir, at its core, relies on two plots or arcs: one that does give a “surface” rendering of events: the “what happened.” But it also needs an interior plot or arc that shows the narrator’s internal, emotional journey.

SWS: I’m currently working on memoir #4 – which kind of shocks even me – just thinking about it. Well, ok, this might sound kind of grim, but it’s about (more or less) my fear of death – written, ironically, from the viewpoint of a lifelong hypochondriac.

But the structure will, hopefully, save it from being too grim in that it’s written as if I’m on a never-ending road trip, careening down Route 17 in New Jersey (I went to high school in NJ), which is a tacky, industrial-strength highway. The tone of the book is both fantastical and realistic in that it’s a kind of true and faux “journey,” obviously very ironic, to circumvent death: both the real thing as well as all the little deaths, like loss, that plague us on a daily basis.

Well, that’s what I think it’s about right now. But I’m in the early stages. My current draft is in shambles, and, for all I know, the book may turn out to be something else altogether. We’ll see….

GD: Thanks, Sue, for talking with me about your wonderful, The Pat Boone Fan Club: My Life as a White Anglo-Saxon Jew, which contains a series of essays about how being Jewish made you feel left out of mainstream American and how Pat Boone, a mid-20th century icon sustained you through your girlhood and has become interwoven into your life even today.

To find out more about Sue, read her bio below. Also be sure to visit her website at http://www.SueWilliamSilverman.com.

Author Bio:Sue William Silverman’s new memoir is The Pat Boone Fan Club: My Life as a White Anglo-Saxon Jew (University of Nebraska Press). Her two other memoirs are Love Sick: One Woman’s Journey through Sexual Addiction (W. W. Norton), which is also a Lifetime TV movie, and Because I Remember Terror, Father, I Remember You (University of Georgia Press), which won the Association of Writers and Writing Programs award in creative nonfiction. Her craft book is Fearless Confessions: A Writer’s Guide to Memoir (UGA Press), and her poetry collection is Hieroglyphics in Neon (Orchises). As a professional speaker, Sue has appeared on various national television programs such as “The View,” “Anderson Cooper – 360,” “CNN-Headline News,” as well as the Discovery Channel.  She teaches in the MFA in Writing Program at Vermont College of Fine Arts.

Thanks, Sue and Gay, for posting this interview. I've read all of Sue's books, and find myself returning to them whenever I need some imagistic prompting. Sue, the bicycle in The Pat Boone Fan Club resonated with me. It brought me back to my childhood days, when I learned how to ride a bicycle, the kind with a banana seat. Keep pedaling!