JOURNEY TO PLANET WRITE: From Film to Flash and Points In Between

Starting in 1977, and for nearly 30 years thereafter, I worked as a writer of two-hour movies for television. “Two hours” is a misnomer as the actual screen time of the movie itself is, in fact, only 93 minutes. A writer has a lot to pack into a very small package and it is the discipline required to do so that has aided me in my transition to flash.

The script is structured in seven acts to accommodate six commercial breaks. Each act averages about 13 pages, more for Act One (15 to 18), less for Act Seven (8 to 9), and must end on an escalating dramatic moment to bring the audience back after the commercials. The end of Act Three needs to be a whopper because that’s your one-hour break; the time an audience is most likely to change the channel. The end of Act Six is the big reveal; i.e. we know who “did it,” and in Act Seven you wrap things up and get the hell out of Dodge. Sounds like an algebra equation, doesn’t it? But here’s where the tie-in to flash comes, at least for me.

Within each act of a TV movie can be any number of scenes, but few run longer than three pages, with most a page to a page-and-a-half. Tiny self-contained stories, they are the building blocks of the movie and, just as in flash, each must address character development, pacing, a dramatic arc, and a resolution that leaves the viewer yearning for more.

I wrote my last TV-movie in 2004. With the increase of reality shows nudging out the genre there were more writers vying for fewer jobs and, frankly, I was a bit fried by then. Between 2004 and 2009, I wrote nothing, nada, zip. Having never written anything but scripts, I was at a loss as to what to do next. Then I fell and broke my neck. Lucky me! Something to write about! And so my blog, injaynesworld-where nothing is sacred, was born.

Fast forward. After a couple of years of dipping my digital quill into the writing of prose, mostly in the form of humor essays, I came across a website called “Five Sentence Fiction.” A one-word prompt was posted each week and you had only five sentences to complete your story. This was long before I had ever heard the term “flash fiction.” My first attempt was in response to the prompt “shirt.” That became my story “Gone,” which would turn out to also become my first published piece when it was accepted by Boston Literary Magazine several years later for their fall 2014 issue.

By then I had written maybe 40 of these tiny tales and realized why I had such an affinity for them. Many of the same disciplines I learned from writing TV movie scenes also apply to flash:


This is a fairly simplistic list, but the correlation for me could not have been clearer.

Today I write primarily micro-flash. Rarely will you read a story of mine that is over 300 words, with most well below the 200-word mark. The writing of flash fiction seeks to create its own fully-realized world within the confines of limited space and, for me, the tinier I can make that space, the happier I am.

A shiny, new tricycle on the sidewalk, abandoned.
A single blue sneaker just inches from the curb.
From the house, a mother calls: “Tommy, supper!” 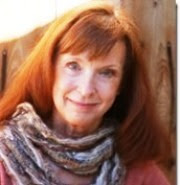 Jayne Martin’s work has appeared or is forthcoming in Boston Literary Magazine, Pure Slush, Midwestern Gothic, Blink Ink, Literary Orphans and Hippocampus Magazine. Her book of humor essays, Suitable forGiving: A Collection of Wit with a Side of Wry, is available on Amazon and Barnes & Noble.  Previously a writer of movies-for-television, her credits include Big Spender, for Animal Planet and A Child Too Many for Lifetime. She lives in a rural valley near Santa Barbara, California, where she indulges her passion for horses and fine wines, and can be found on the web at http://injaynesworld.blogspot.com.

Purchase Big Spender written by Jayne Martin at Amazon
Posted by Gay Degani at 11:54 AM

This is terrific! Thanks Jayne for your insights and Gay this is a wonderful feature. I look forward to more!

Jayne knows from where (whence?) she speaks. This was so interesting and her flash tips are right on the mark. Thanks for posting this, Gay.

I'd never thought of watching a movie this way and your own journey is fascinating. Thanks.

Jayne! Loved reading this. Your writing journey is inspiring, and reminds me that we are at our best when we write what we love.

Your perspective as a micro writer from scriptwriting, Jayne, is fascinating. I loved reading this.

This is terrific! I think screen writing is a great skill for all writers to learn. Love Jayne's points about starting late, etc. Loved it! Thanks Jayne and thanks Gay!