JOURNEY TO PLANET WRITE: Why I Felt Jealous of a Twelve-Year-Old 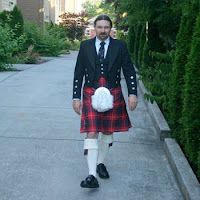 I knew almost as soon as I could write that I would become a writer. In my childhood, I put a schedule on my door insisting on undisturbed writing time each day. I had my parents custom-build a desk into the nook of my closet, with a small bookshelf installed above it, a gooseneck lamp, a door I could close—barely into a double-digit age, I had my own writing space. I wrote my first book by age twelve, won writing contests, and had only to wait for success to find me.

None of that is true. Or, it is true, but not of me. Working for a city newspaper during my college years in Texas, I was assigned to report on the local library’s youth writing competition, and all those wonderful, writerly details—the schedule, the desk in the closet, the book, the ambition—are from the profile I wrote about the young girl who won that year.

In my actual story, my parents gave me a desk, but I used my pencils and ballpoint pens to stipple the surface until it looked less like wood than like pumice. In second grade, I spent hours alone in my room writing pages and pages of material, but it wasn’t creative—my mother got tired of forbidding me my misadventures and told me to copy the definition of “No” 100 times, unaware that “No” comprised a full three pages in our family dictionary, two columns each page, in tiny print. I didn’t write a book by age twelve, but I did invent lyrics to absurdist songs about defecation and once adapted “On Top of Spaghetti” as a bawdy sex lyric.

In other words, I wasn’t born to be a writer. Or at least, I didn’t behave like one when I was a kid. My father wrote scathing editorials and short satirical pieces, my paternal grandfather was a natural storyteller full of a ship captain’s sea yarns, my maternal grandmother was a closet memoirist—but I was just a kid. There was nothing magical about my upbringing, no prophetic sign that I would take up the pen and the keyboard and become a writer.

Though there was my seventh-grade English class. 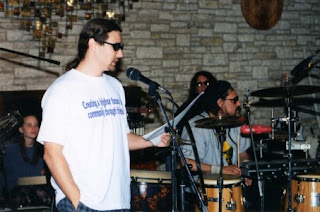 My middle school had begun a program of weekly “sustained silent reading” periods, and my English teacher, Mrs. Hoffmann, added a second period of “sustained silent writing.” We were allowed to write whatever we wanted—journal entries, rap lyrics, love poems—and I decided to write a novel.

I’d been reading a lot of my father’s action novels and was just beginning to discover Stephen King, and I realized that when I tried to predict what might happen next in whatever novel I was reading, I wasn’t hoping to decipher the story, I was wishing the story had gone differently—I was inventing stories of my own. I was rewriting stories as I wanted to read them. And right around the time I began to think that if Don Pendleton could knock out half a dozen Mack Bolan/The Executioner novels every year and sell millions of books, then surely I could, too, my English teacher gave me the gift of designated, disciplined writing time.

My first novel was about a teenager whose parents were killed by an evil crime boss surrounded by ninjas; in his sorrow and anger, the teenager devotes himself to martial arts and fights his way through the ranks of minions to confront the crime boss.

I eventually gave up on that novel, but Mrs. Hoffmann—who, after school, had become my first writing mentor—insisted I keep telling stories. My father signed me up for a writing workshop on how to publish (neither of us knew until I arrived that the workshop was for romance novelists, but I eagerly took notes on plot outlines and novel advances). I developed a sci-fi series about an alien race and invented a religion and a language. I began writing horror, stories about necrophiliacs and occult serial killers and mutated warriors held prisoner by secretive government agencies. I found Anne Rice and spent most of high school and college toiling over a melodramatic vampire novel.

Which is to say that by the time I wrote that newspaper article on the young library contest winner, I already was a writer. Yet I still hesitated to call myself one, and I marveled at this kid living a literary life I still felt outside of. 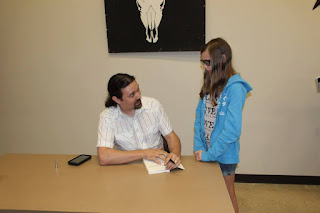 When I started that novel back in middle school, I began imagining the origin story for my writing career—publication as a teenager, phenom status, appearances on talk shows—and ten years later, working on that article about the kid writer, I began to wonder if I’d missed my chance. My origin story was too long delayed. I had wasted all those years poking holes in my writing desk and making up feces songs instead of becoming the writer I dreamed I ought to be.

In some parallel universe, there is a version of me that did publish as a teen and go on talk shows. He is telling the origin story I wrote for him decades ago. In another universe, there is a version of me who has never published. He is still concocting new origin stories, new fantasies. They will go into a password-protected file where no one will read them except that other Sam, late at night, only the computer screen and his fantasies alight in empty room.  In yet another universe—this one—there is me, many writerly milestones behind me but still sending ahead invented milestones to reach for (an advance on a book deal, film rights, career stability). And here I am, revising my childhood origin story, realizing that I started out as a writer in exactly the way I ought to: by daydreaming, by writing the stories I wanted to read, by crafting the story of myself, by always trying to make it a better story. 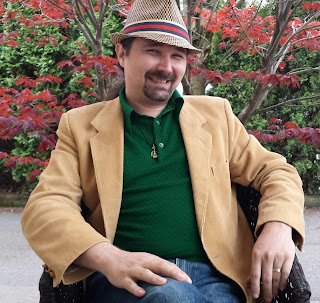 Samuel Snoek-Brown teaches writing in the Pacific Northwest. His work has appeared in dozens of literary journals, and he serves as production editor for Jersey Devil Press. He’s the author of the chapbooks Box Cutters (sunnyoutside 2013) and the forthcoming Where There Is Ruin (Red Bird Chapbooks 2016), the forthcoming novella In the Pulse There Lies Conviction (Blue Skirt Press 2016), and the historical novel Hagridden (Columbus Press 2014), for which he received a 2013 Oregon Literary Fellowship. He is online on Facebook, Twitter, and at snoekbrown.com.
Posted by Gay Degani at 11:45 PM